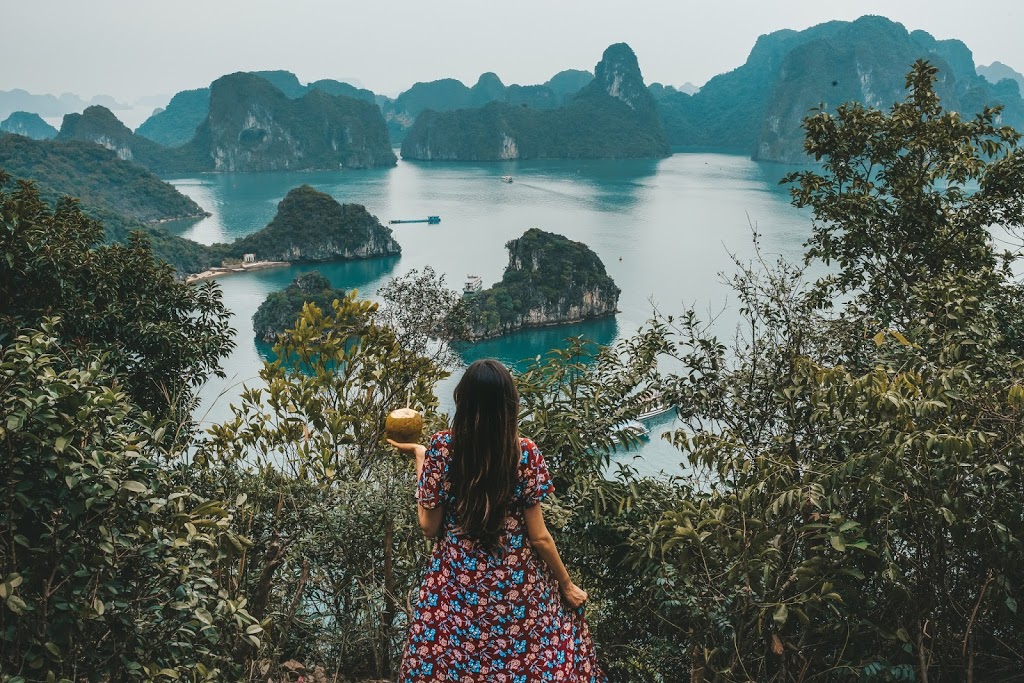 A few weeks ago I took an extremely short trip to Vietnam, which from USA, is really considered quite short. This trip was definitely last minute for some family emergency, and I was already low on my time off hours at work.  So, I made the best of the available days and did what I reasonably could to enjoy my quick getaway!

After spending my first day in Vietnam in Saigon with the family, we flew to Ha Noi, which had the closest airport in the vicinity of where I wanted to visit. We were lucky to know a family member who knew a friend in this area that worked as a private driver, so we rented him. He picked us up from the airport and it was a 4 hour drive to Ha Long from there! We reached our hotel in Ha Long around 8PM that day, and just like that, my second day in Vietnam was coming to an end.

Being the only hotel ranked 5 stars in Ha Long, Wyndham also has an exceptional view of the bay. We all had our own room on the same floor, just a few rooms apart from each other. I almost wanted to fall in love with this place but it was hard to enjoy it without my favorite travel partner (my boyfriend). My room was an executive suite on the 6th floor with a huge tub, enclosed glass screens around the restroom, a balcony, and spacious room.

Sunrise had to be my favorite time spent in the room. I would wake up, walk outside to my balcony, and take in all the view of the limestone islands and emerald water. It’s not everyday you get to wake up to a World Heritage View!

On our first and only full day there, we started our day early and would occasionally come back to the hotel to gather ourselves before continuing with our adventures. I caught the sunset in my room that day there and watched before my eyes the sun disappeared and city lights come alive. 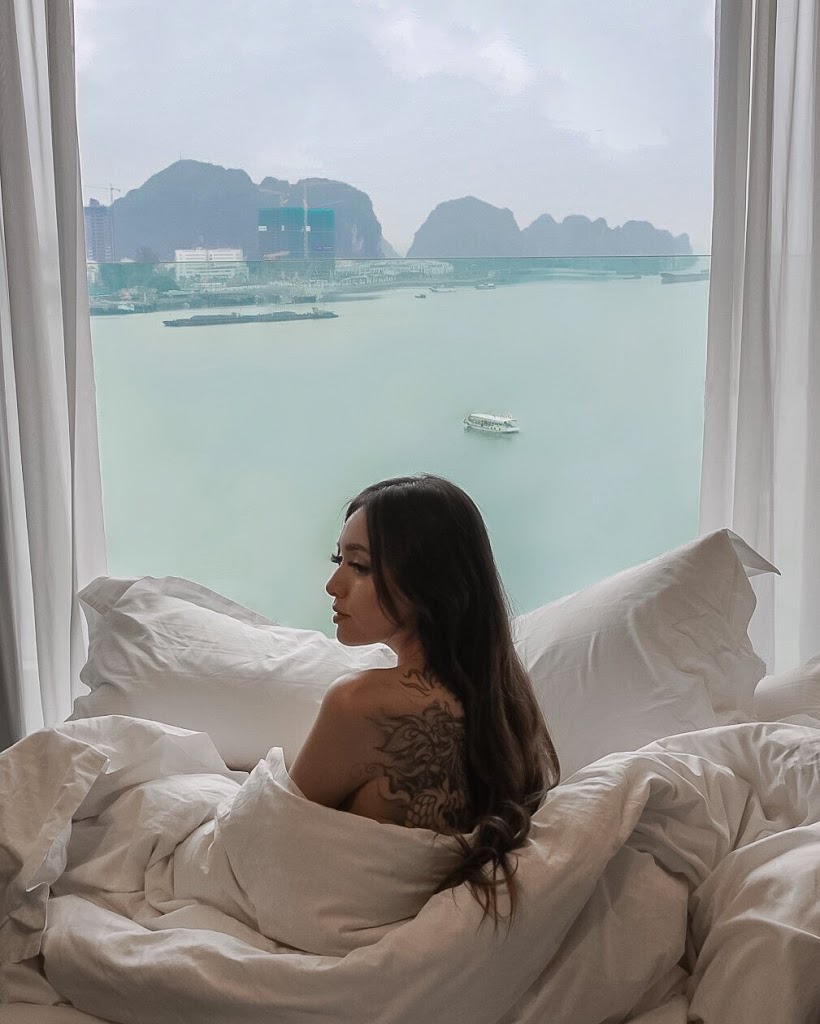 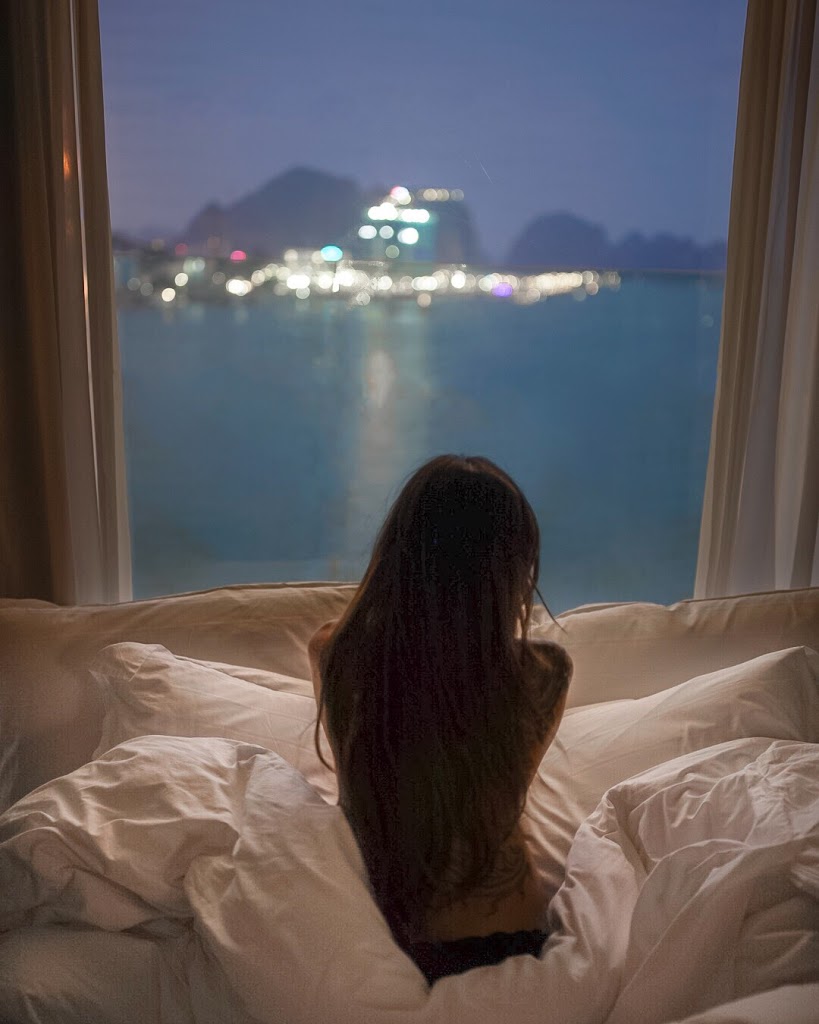 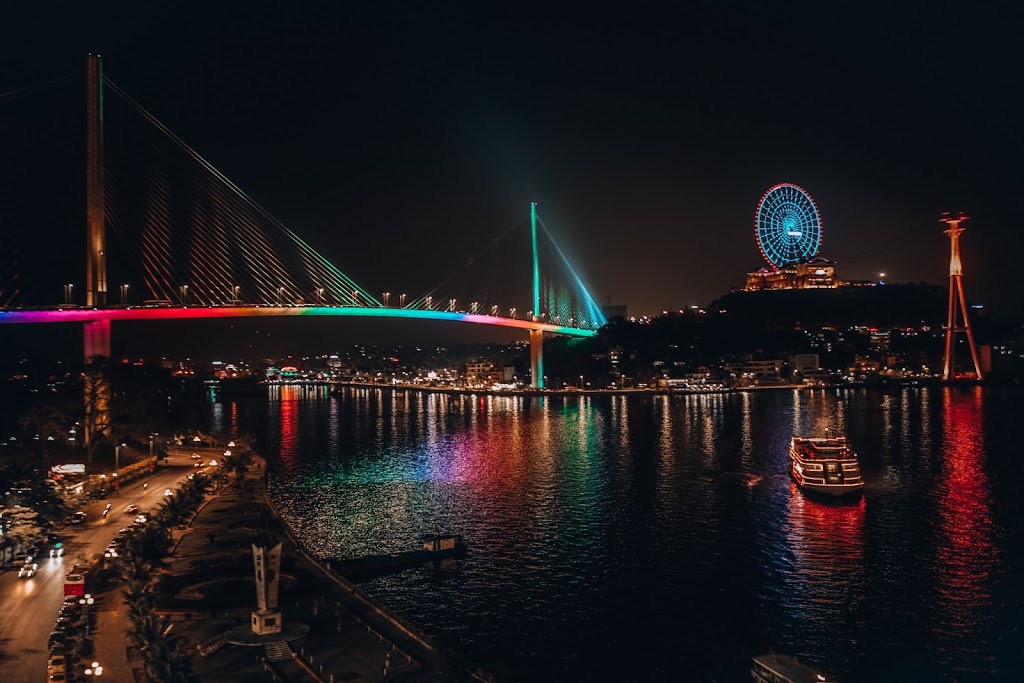 (View from the room after dusk)

We checked out really early morning the following day and was on the road for a little 3 hours before reaching the next city. Unfortunately during our stay, I was only able to enjoy it very shortly in my room and the spa, salon, and gym were undergoing maintenance during my stay as well. We didn’t have an opportunity to experience dining experience here either. However, given a chance to revisit, I would come back for a full experience!

During our visit in Ha Long, we opted for the Ha Long Bay Cruise. We didn’t bother booking pre-tickets as we knew there would be endless tours available at the cruise ship terminal.

By 8am, we were already at the cruise ship terminal on Tuan Chau Island, where we were approached (and harrassed) by several independent people asking to join their cruise on their boats and other private tours. But just to be safe, we went with the legit tours that were sold at the counter that had the different sites we’re visiting printed on their ticket. A ticket at the counter costed us about 270,000 Dong, which is roughly $20 USD.

By 9am the tour guide called our group from the waiting room and led us to our boat.  It was definitely one of my favorite cruises I’ve been on.  We were offered food, drinks, and alcohol on the menu and had the freedom of enjoying the view from both lower or upper deck. The lower deck was enclosed and provided dining tables, while the upper decks was an open air with seatings. It wasn’t overcrowded either, so plenty of space to roam between the 2 floors and enjoy the view. It was a magical feeling as we’re cruising through one of the Seven World Wonders. 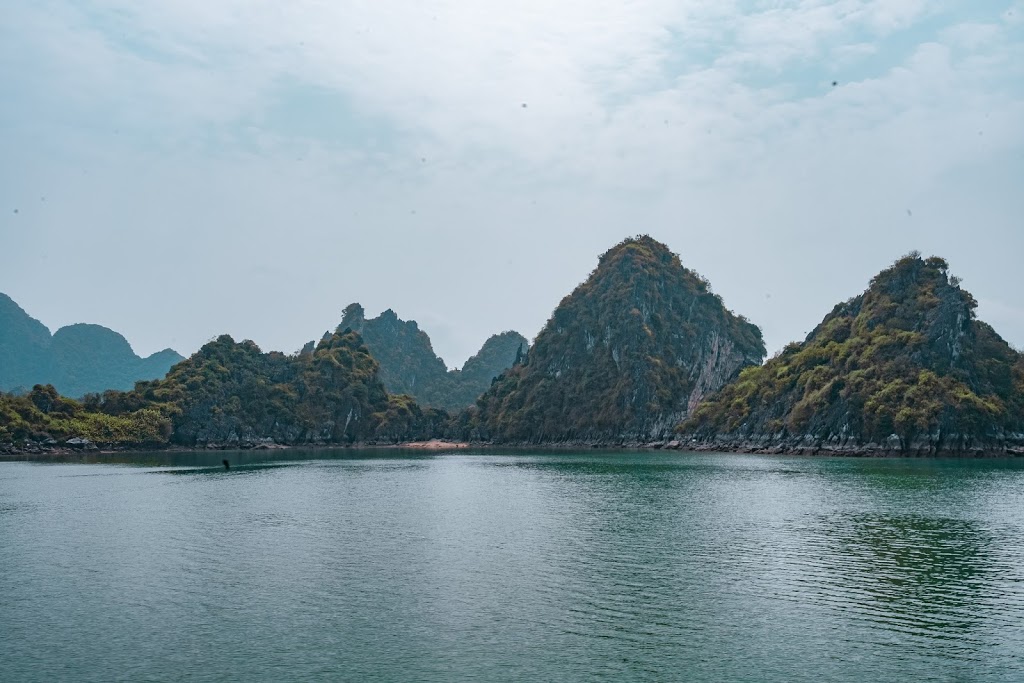 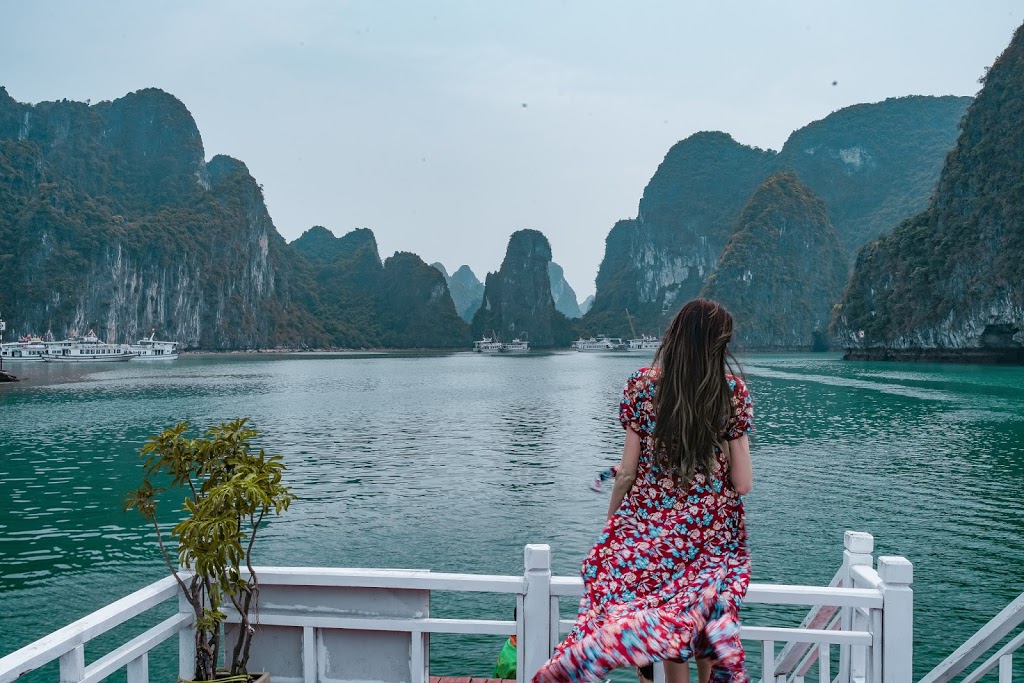 (View from 2nd deck on the boat)

Our tour took us to several stops, but my memorable stopping points were Sung Sot Cave and Ti Top Island.

Sung Sot Cave
I definitely remember visiting this place when I was younger, but it was cool to check it out again now and understanding the history and stories behind it. Carved passageways are available for tourists to walk though the caves, only after climbing several flights of stairs alongside the island. Once inside, unique limestone formations are everywhere and a naturally formed “Turtle” statue that everyone adds money to it and make a wish. At the end of the cave exploration, we’re led to a viewpoint of the Ha Long Bay, which Is indeed a beautiful view.
Ti Top Island

Hands down, this is the best view point of Ha Long Bay. But beware, this place is swarm with tourist all visiting for the same reasons! Ti Top Island was actually named after some Russian guy name Ti Tov who lived on the island or something like that. In order to get to this viewpoint, we had to set flight for approximately 450 stairs up, with some parts extremely steep.  There’s also a beach on this island, which is also, overwhelmingly crowded. You definitely can’t escape the crowds and you wonder where they all came from when you haven’t seen that many people or boats all day. 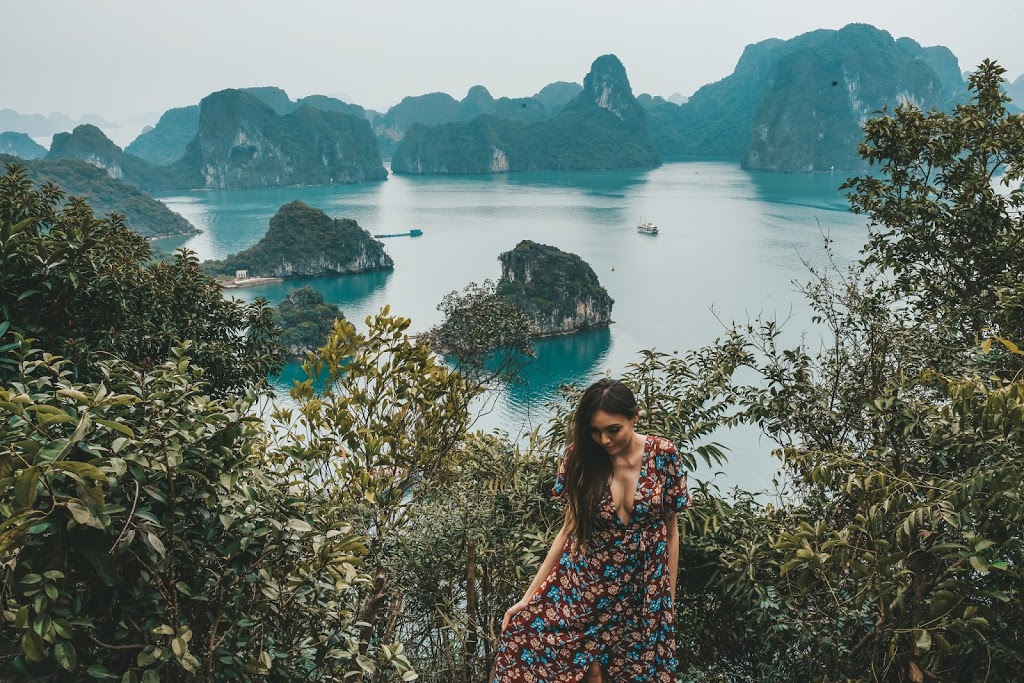 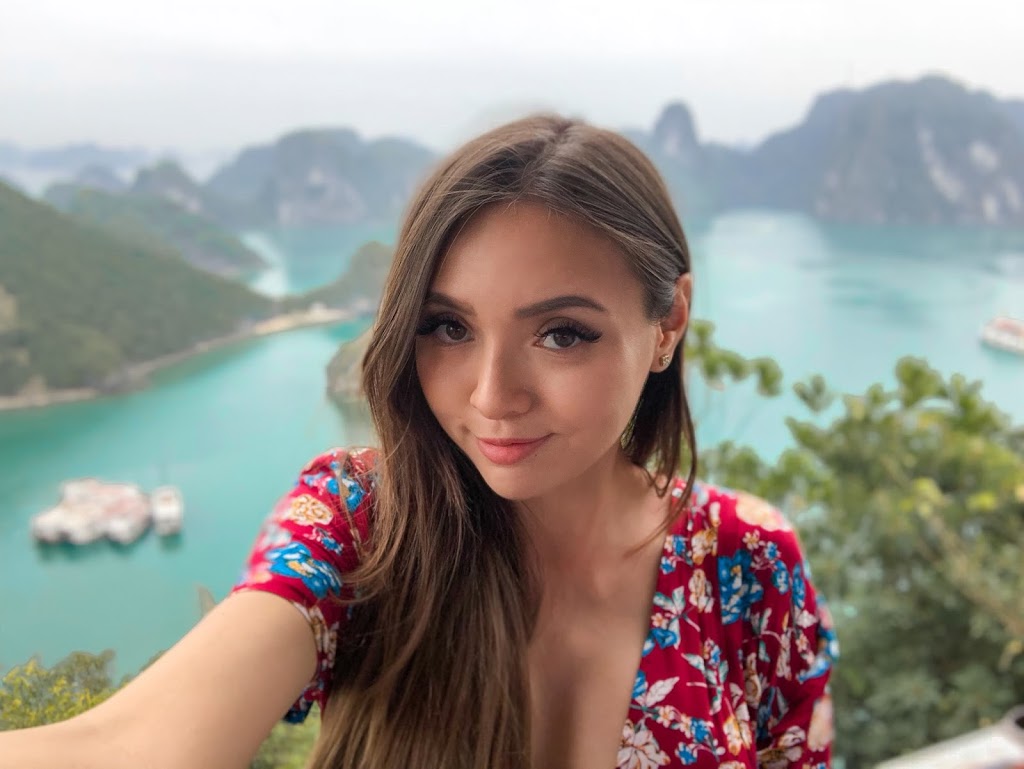 (View from the top of Ti Top)
Tam Coc

On the early morning we checked out from Wyndham, it took us about another 3 hours to reach Ninh Binh City. We reached the city by 8AM and decided to start our day at Tam Coc before checking in.

Tam Coc is also a World Heritage place, and a national forest. Tourist are rowed by small row boats as a way to explore the forest. This was one of the main ways the locals here made a living. Each local gets to row a boat of passengers down the Tam Coc river per day, or sometimes per week, depending on the cue of the locals. There were hundreds of people gather around waiting for their turn to board their boat, as well as the locals waiting for their turn to work. This “tour” was an intimate and more serene tour. Although our rower was fairly young, I couldn’t help but noticed how many rowers over the age of 50 rowing a boat full of passengers (max 6 passengers). The strength these people have! What’s also cool to see is how many are rowing with their feet! After going through 3 caves, we reached the end of the river where there were several boats selling all sorts of snacks and drinks. We were also able to get on land for a bit, where I played and fed some of the goats there. The tour was  approximately 2 hours and was worth it. 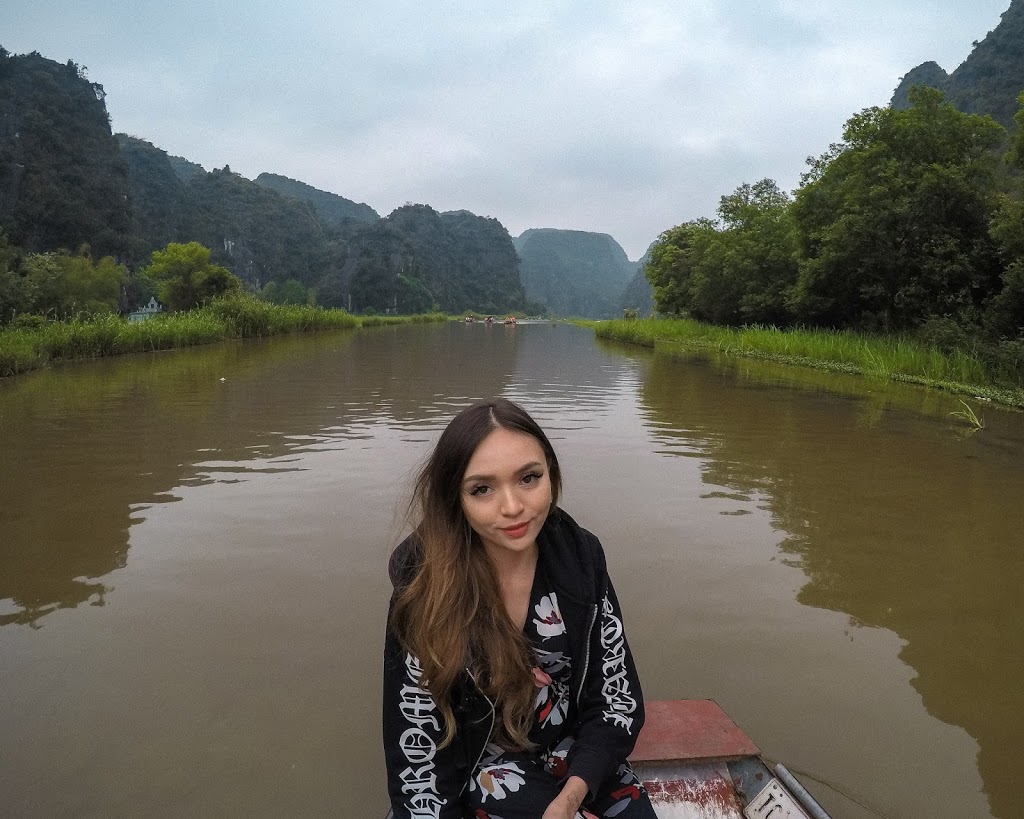 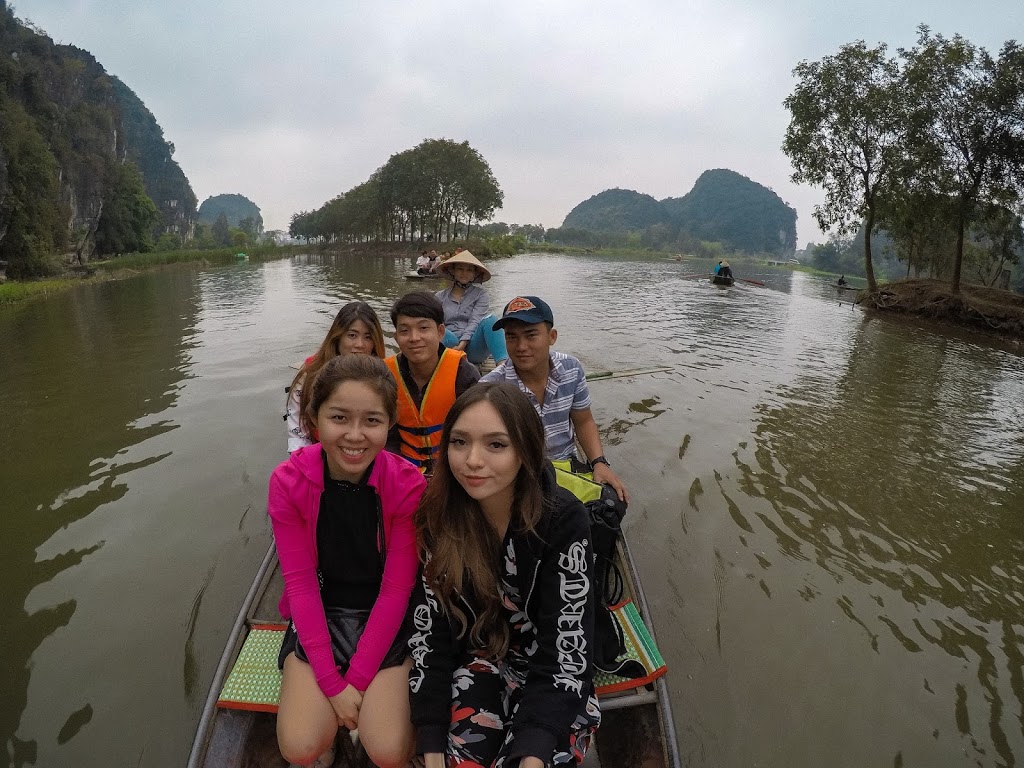 (Views while being rowed down the Tam Coc River)

We drove back to our hotel to checked in, eat lunch, and relax for a bit before heading to Hang Mua, which was relatively close by. 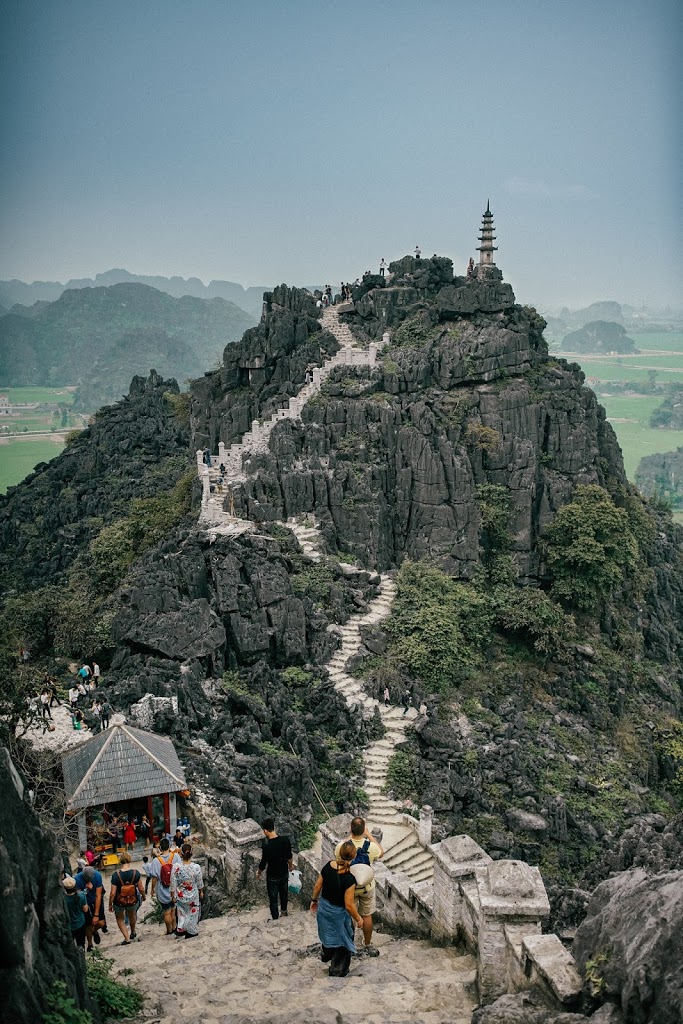 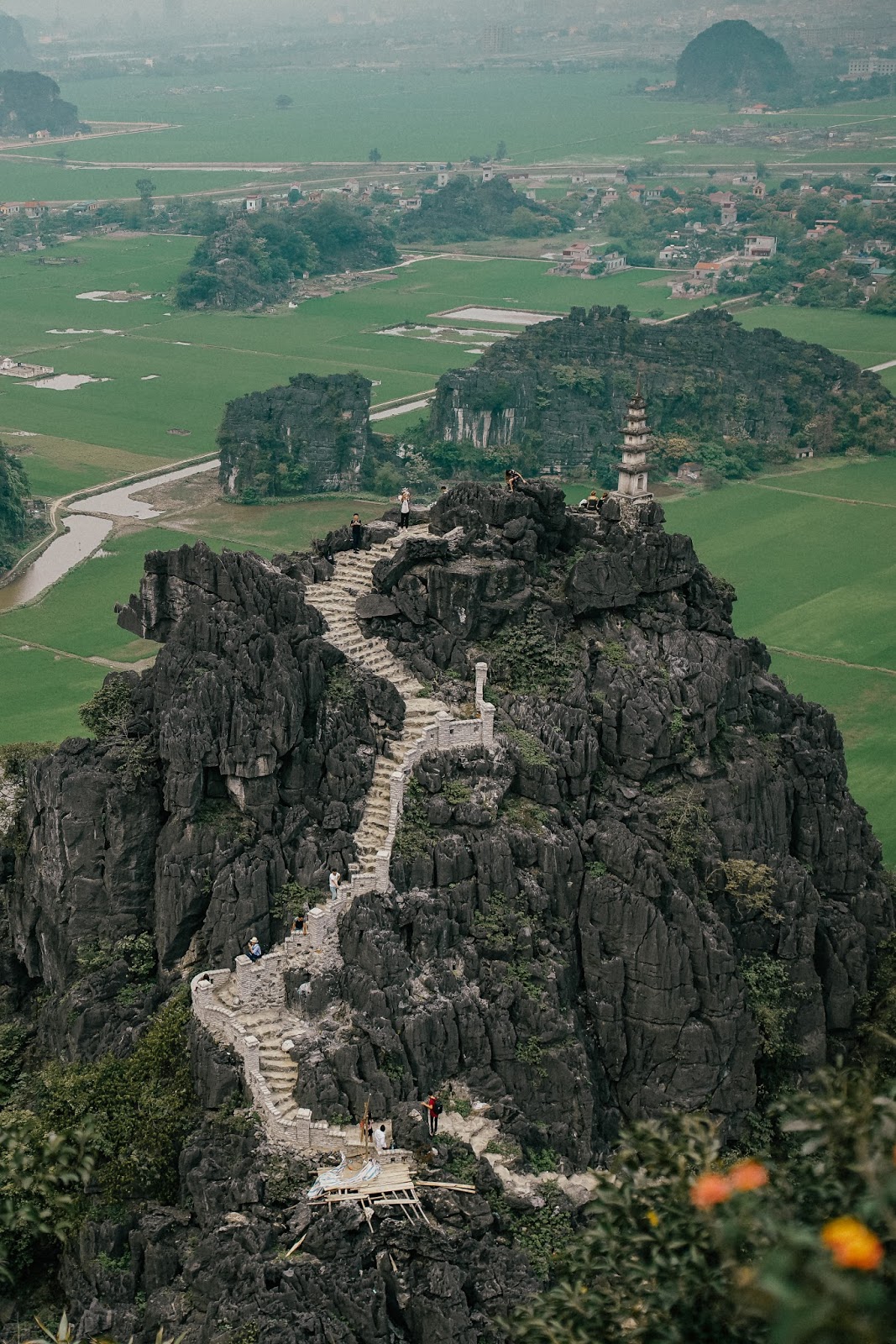 Hang Mua was extremely busy when we visited around 3pm. Nevertheless, the view is to die for, and incomparable to the views of Ha Long Bay as endless rice fields views are in its own category. With over 700 rather steep steps to climb, the view along the way was also a sight to see. Halfway up, the flight of stairs splits in two, one each leading to a different mountain. The left mountain had a view of the Tam Coc River, where I was recently at and a temple at the very top with a huge statue of the Lady Buddha. The left mountain has a small pagoda at the top and that’s it. I was proud enough to say I went up to both of the mountains and have to say the views on the left mountain triumphs the right. 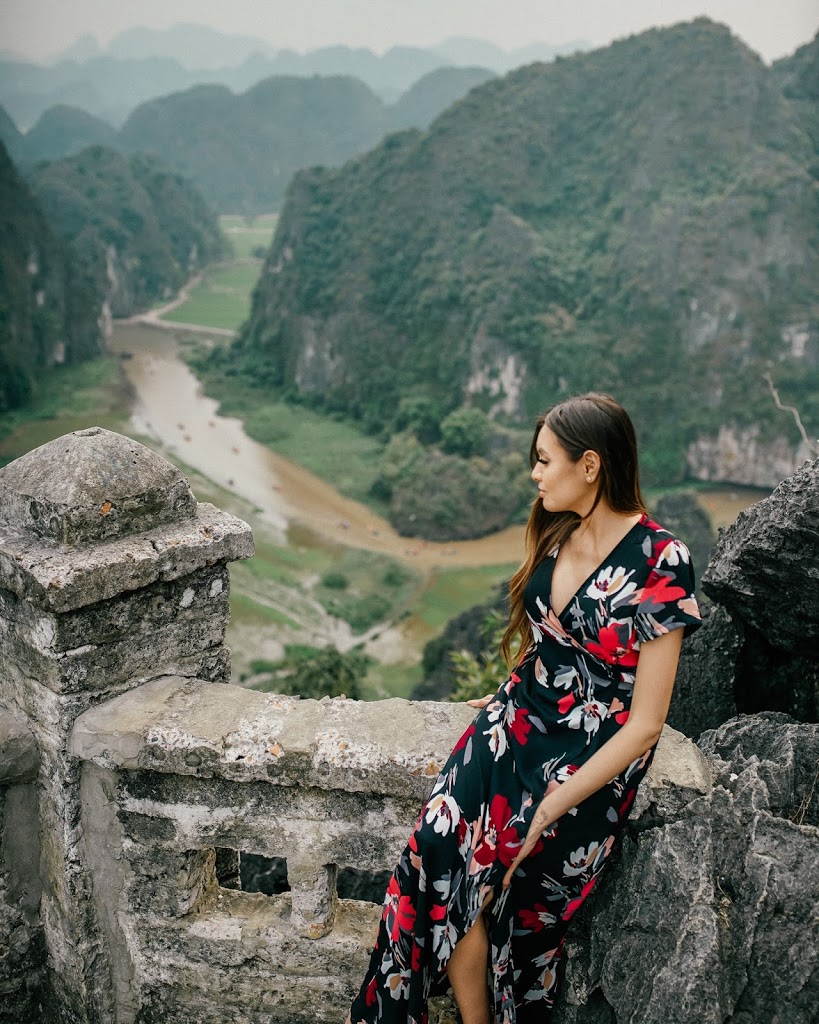 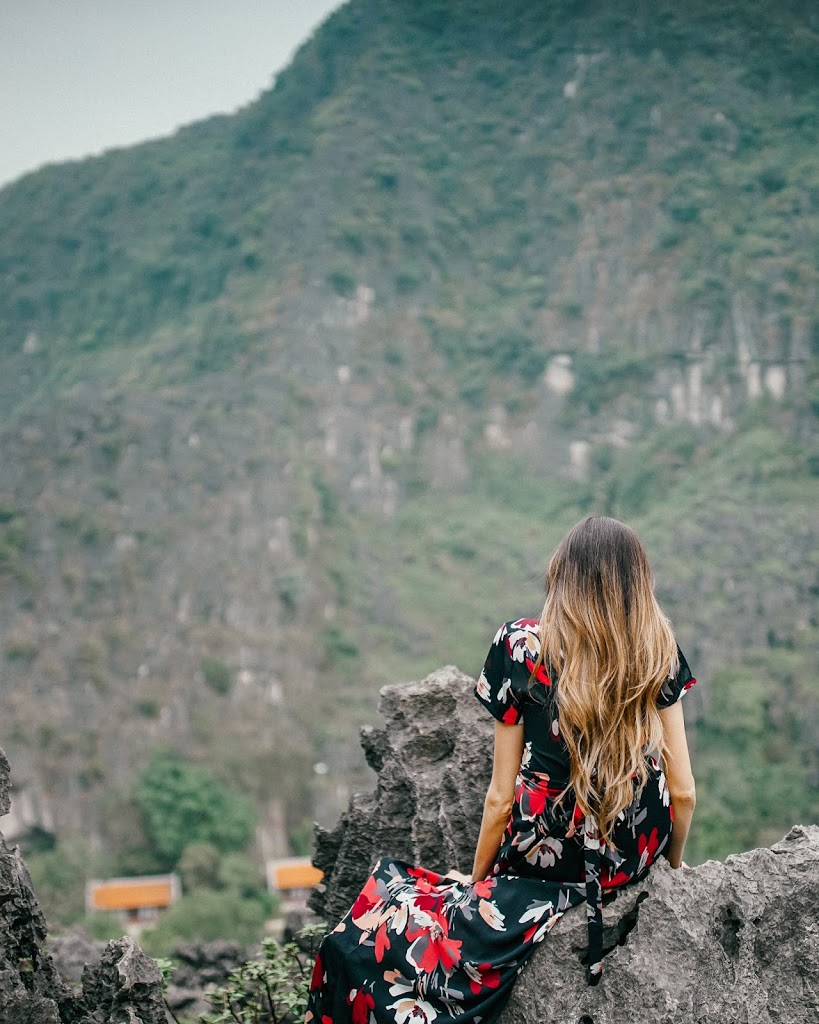 I visited this temple after the strenuous adventure of Hang Mua and already with 10% energy remaining. Therefore, I spent more time walking around the entire temple and enjoying it, rather than capturing memories with my camera. This temple is a World Heritage site as well and extremely beautiful in terms of design and layout of every pagoda, house, and passageway. It is definitely one of my favorite temples I’ve visited in the world and if given the opportunity, I’d need to revisit this place to fully admire and capture the beauty of it. 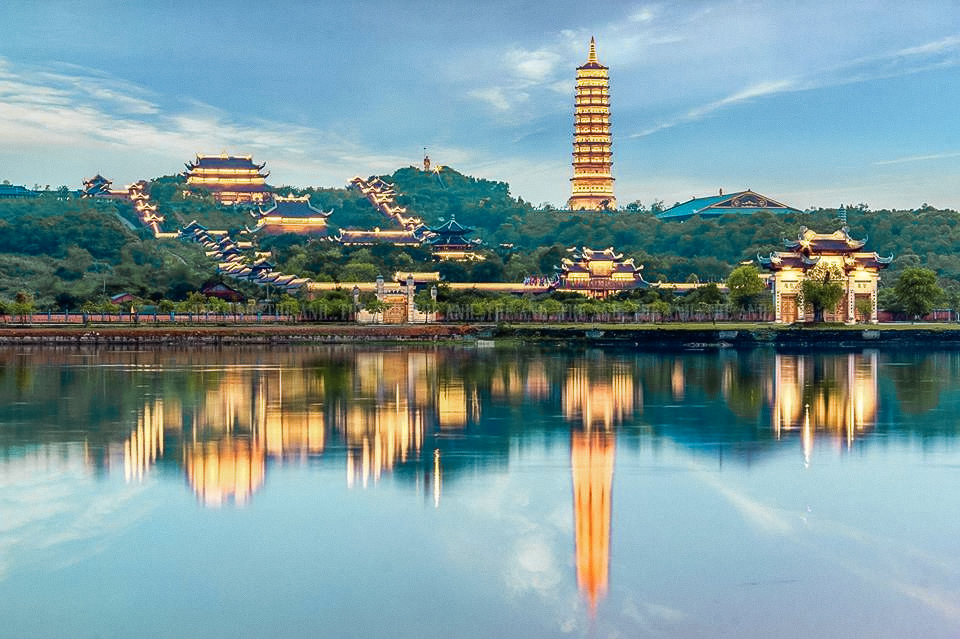 For those wondering where I stayed, I stayed at Ninh Binh Hidden Gem Resort which was in the center of the tourist area and the latest King Kong movie was filmed right in its back yard! The stay was brief but the staff was exceptional. We each got an executive suite with a balcony, with the view of the rice fields and limestones rocks. There were several amenities at this resort which we didn’t get a chance to explore since we were out the entire day and came back to get some quick sleep before being on the road again! 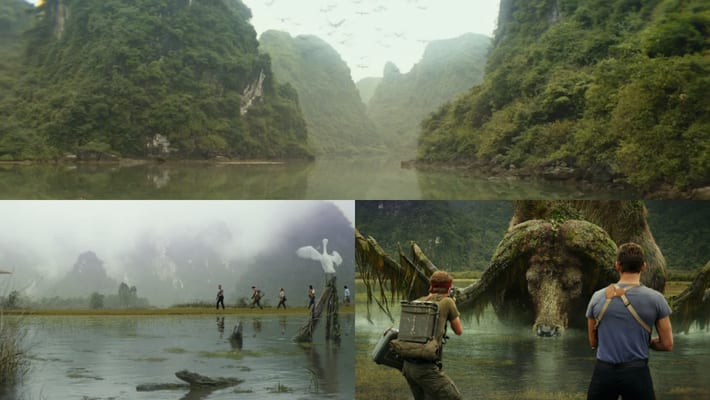 I found that goat was the essential choice of meat here and it was inevitable to find a restaurant that doesn’t specialize in it. Luckily, staying in the central tourist area helped us with a better selection of restaurants that served more than just goat.

Ninh Binh was definitely a different experience compared to Ha Long Bay, but both were amazing and there were just no words for the views! Ninh Binh definitely had more of a countryside feeling to it while Ha Long Bay did feel a bit commercialized from all the tourist centers on a long strip of the street. Overall, I’m so glad to be able to squeeze these two amazing cities in just 3 days and flew home with a decreased in my phone storage and an increase in memories.

Maybe you can squeeze these amazing destinations into your or Asia Tour or Vietnam itinerary?